Building the Blessed City Together - an evening of Gratitude and Hope

You are invited to join the Interfaith Assembly and our partners and support our work as we celebrate individuals who help create a more equitable and compassionate city. The Online event will run from Thursday, December 3rd at 7PM to 8PM -- with a musical performance from 8 PM to 8:30 PM coordinated by the Rev. Robert Brashear -- while the online auction continues. The online auction will remain open until midnight, Sunday. December 7th. Zoom Doors open at 6:50 pm EST. The online auction will run from Monday, November 30 at noon to Sunday, December 7th at midnight. The auction proceeds will go to benefit the work of the Interfaith Assembly on Homelessness and Housing. 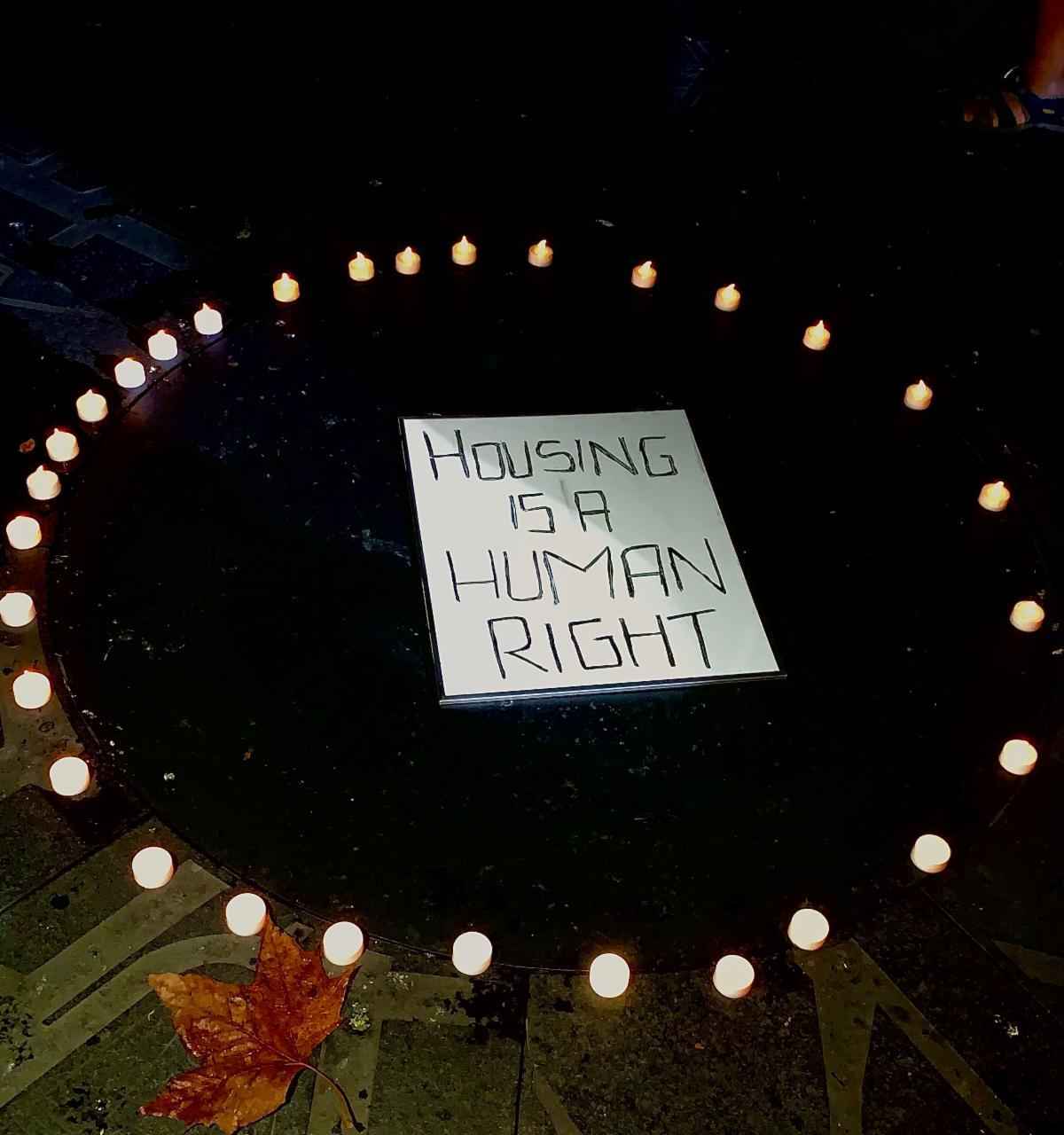 Building the Blessed City Together - An Evening of Gratitude and Hope.

There are currently no tickets available for this event, but you can still make a donation. 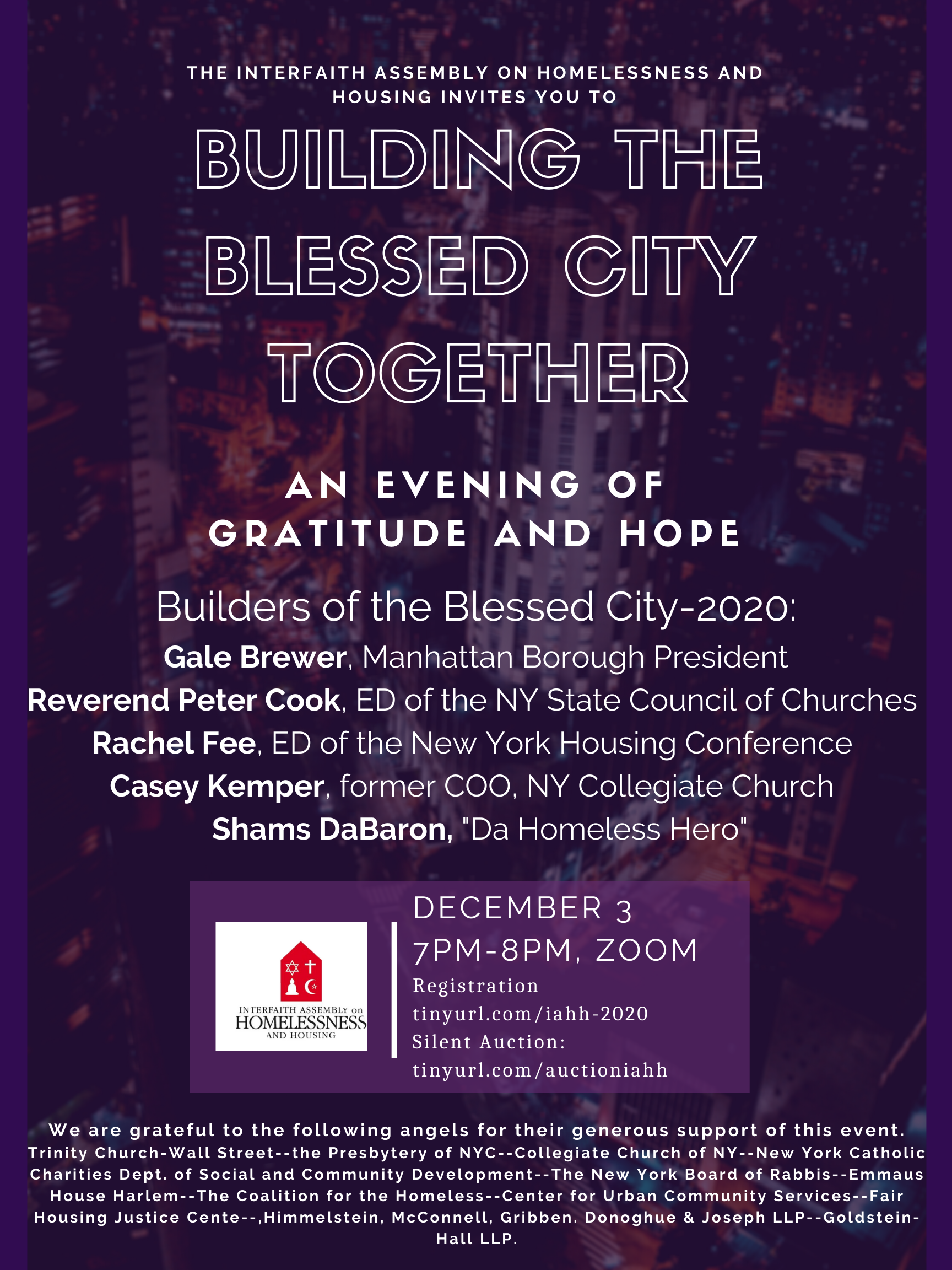 Our Builders of the Blessed City 2020:

Gale A. Brewer is the 27th Borough President of Manhattan.

Since she took office in 2014, she has successfully passed legislation to reform the deed restriction process, add ‘caregivers’ to the city’s anti-discrimination law, remove criminal history questions from initial employment applications (the “Fair Chance Act”), and enforce requirements for street numbers on buildings in Manhattan (to aid emergency workers). She has also spearheaded community planning initiatives at the South Street Seaport, in East Midtown, and in other neighborhoods to address development and zoning issues.

In 2018, Brewer served as Chair of the Large Cities Council of the National League of Cities, and has been named a member of their 2019 Human Development federal advocacy committee, which advocates NLC policy positions on issues involving social services, children and learning, poverty and income support, employment and workforce development, equal opportunity, Social Security and seniors, individuals with disabilities, public health care, mental health parity, and immigration reform.

Brewer previously served on the City Council for 12 years, serving as the founding chair of the Technology Committee and leading the Government Operations Committee. There, the Council passed her legislation guaranteeing paid sick leave for most hourly employees, requiring all City data be published online, and protecting domestic workers from abusive practices.

Prior to that, she served as Chief of Staff to Council Member Ruth Messinger, NYC Deputy Public Advocate, Director of the city’s Federal Office, and Executive Director of the Mayor’s Commission on the Status of Women.

Brewer has an MPA from Harvard’s Kennedy School of Government and did her undergraduate work at Columbia University and Bennington College.

Shams "Da Homeless Hero" Da Baron has become a powerful voice for the thousands of New Yorkers who are currently residing in New York City's shelter system. Currently living in the Lucerne Hotel with 400 other men on Manhattan's Upper West Side, Shams has helped thousand of New Yorkers to hear the genuine voice of someone who is rebuilding their life while living without a permanent home. Shams has respectfully yet forcefully made clear that those who are homeless must have a seat at the table when the decisions effecting their lives are made,

Shams also has a rich history in the world of Hip Hop and community peace making and brings all of those talents to this moment in the work of building a blessed City in which everyone has a safe and nurturing place to live. Shams has been working in partnership with the Upper West Side Open Hearts Initiative which has been helping to create a truly welcoming community for the Lucerne's 400 residents.

Rachel Fee is Executive Director of the New York Housing Conference. With nearly 20 years of experience in the areas of affordable housing, public policy and nonprofit management and a deep commitment to creating housing opportunity for her fellow New Yorkers, she oversees operations, policy and program initiatives for the statewide coalition. She is an effective advocate for housing policy and resources at the city, state and federal levels.

Rachel’s career in affordable housing is grounded by eight years of experience at New York City’s Department of Housing Preservation and Development where she began as a project manager in the division of special needs housing. She later went on to direct the agency’s strategic planning group and then federal affairs.

Before entering public service, Rachel worked for non-profits specializing in academic-industrial partnerships in Dublin, Ireland and Washington, D.C. She graduated from Colgate University with a bachelor’s degree in political science and received her master’s in economic science from University College Dublin, Ireland.

Casey Kemper is an established professional and leader in real estate portfolio management and consulting. Casey’s experience has been shaped by a history of providing a broad range of services to real estate in situations, owners, and non-profit organizations.

Casey has served as a senior executive at a major real estate institution, an international bank, a large real estate development company, and a well-known endowed non-profit.

Casey has deep institutional experience and an entrepreneurial spirit. He is a thoughtful and creative problem solver who is committed to his client’s success. Approaching each challenge and assignment with dedication, he prioritizes understanding of the client’s needs as an initial focus. This needs assessment then guides his work in developing recommendations and solutions in collaboration with the client.

During his tenure at Collegiate Church Corporation, he transformed a legacy portfolio of under managed properties into an institutional grade portfolio. In doing so, Casey played a major role in creating substantial real estate value. The net result was a total portfolio restructuring and an increase of over 300% in the Collegiate Church endowment value.

The Reverend Peter Cook serves as Executive Director of the New York State Council of Churches which represents 7,000 congregations across the state of New York. Prior to serving the Council, Reverend Cook served as Senior Minister at First Congregational Church in Burlington, Vermont and The Plymouth Church in Framingham, Massachusetts and Pastor of St. John's United Church of Christ in Waukegan, Illinois. Ordained in the United Church of Christ, Reverend Cook received his BA from Lewis & Clark College in Portland, Oregon and a MA in Liturgical Theology and a MDiv. from Pacific School of Religion in Berkeley, CA.

At St. John’s, Reverend Cook worked to establish 22-unit affordable housing development for Seniors and People with Disabilities---Chapel Garden Senior Apartments. In his pastoral roles, he has been a strong advocate for the development of affordable housing. He currently serves as Vice-President of the Interfaith Affordable Housing Collaborative and is directing the Council’s Who is My Neighbor Community Development Initiative to help faith institutions use their property to better serve their town. The Council is also part of the Faith-Based Affordable Housing and Community Development Partnership recently funded by Trinity Church Wall Street. The Partnership helps congregations in New York use their property to build affordable housing and promote more just housing policies. Reverend Cook has also established schools and water wells in Southern Tanzania as part of the Africa Exchange project begun at Plymouth Church. He is recipient of a Lilly Endowment Pastoral Renewal Grant which brought him to study approaches to economic development in post-apartheid South Africa. He visited India in the fall of 2019.

You can support us by making a donation!